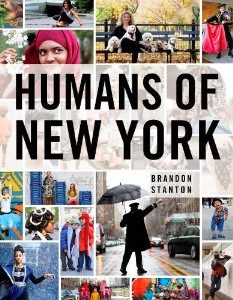 Not too much to say about this one. I love the Humans of New York website (which I follow on Instagram and Facebook). I didn’t realize how young this project was (since late 2010). The new book that is out probably collects pictures from all during that time period, even back when there were fewer interviews going on. Either for that reason, or because the editors decided to cut stuff, there wasn’t as much text with the pictures as I expected to see. There were no microfashion posts, but a lot of “seen in [this location]” captions on children, which makes me wonder if they’re the same. I think the book would have been better with more text about each photo. Half of the “human” element of the project is the text behind each photo.

There were some good pictures. It’s a good book to look through. I highly recommend following the website. New York is fascinating.

Agender empty-nester filling my time with cats, books, fitness, and photography. She/they.
View all posts by Amanda →
This entry was posted in 2014, Adult, Visual and tagged mini-review, nonfiction, photography, POC. Bookmark the permalink.

1 Response to Humans of New York, by Brandon Stanton