Ruin and Rising, by Leigh Bardugo 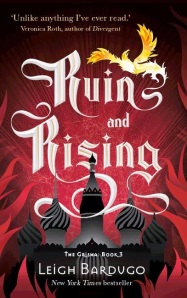 Third in the Grisha series, after Shadow & Bone and Siege & Storm.

This will be a hard one to write about.

First, let me just say that Ruin & Rising was my number one most anticipated book of 2014. There are a LOT of books coming out this year that I’m really looking forward to, but this one tops the list. I pre-ordered the book from Barnes & Nobles because it came with an exclusive Darkling prequel, and I knew I had to read that. Then, closer to the release date, I realized I was going to be in Boston on the day the book came out, and thus wouldn’t get my book day-of. I thought I could just wait a day, though it annoyed me, since I’d be back from Boston the day after. But then I got the notice that my book was SHIPPED on the release day and would take until Saturday to get to me. No. That began a multi-hour, multi-mile trek across downtown Boston to find a bookstore that would sell me the book (it took seven stores to find it). It didn’t matter if it had the prequel, because that would get to me Saturday. But I HAD to get my hands on Ruin & Rising.

And I did. It took me until 2 in the afternoon to do it, but I finally found the book. I’d already read the prologue and first chapter online, so I began right in with the second chapter, sitting on a bench in the mall. I was THAT anxious. Mall, park, another park – I kept stopping to read on the way back to meet Jason at 5, and I ended up reading 200 pages that first day. It was SO GOOD. Everything I wanted from the book, I got: more info on the Darkling’s motivations, more about the history, knowledge about what happened to some of the characters, etc. 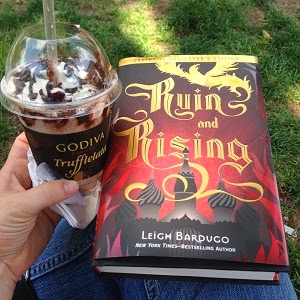 The next day, I had to get up super early to fly home, and of course as soon as I was checked in and waiting for my plane, I pulled out the book. I read…and read…and read. And enjoyed the hell out of the book…up until one single moment, which completely broke my heart.

Now, this isn’t one of those “a beloved character dies and so I cry and uselessly rail against the author in protest” moments. No. I have never been one of those readers who get mad when an author kills off a character. Actually, I generally admire the author for it, because 1) it takes a lot of guts when you know your audience will be mad about it and 2) it frickin’ hurts to kill off a character like that! A couple years back, I had to kill off a character that I loved to pieces in one of my own books, and I mourned that character for months. And, I only mourned after spending weeks frantically looking for a way to NOT make the kill, or to bring the character back to life (after all, the book had magic in it, and I COULD have done it). But if I HAD done it, it would have felt like cheating, even if it made sense within the logic of the book. The book would not have been as powerful without that death.

And Ruin & Rising? Well, it felt that same way. There was something that happened, something that was incredibly powerful and sorrowful and devastating – and then it was undone, and that’s the moment my heart broke, even though the undoing was perfectly within the logic/bounds of the book/world. Because the book…no longer felt as good as it could have been. It was still good, yes, but it felt just shy of great, and oh man, it COULD have been great. And I wanted it to be, because this is the best series I’ve read in a very, very long time.

That is why I didn’t love it as much as the other two, which were both favorites of mine. That is why it’s hard to write about the book, because I loved it so very much while simultaneously disappointed by it for not being even better.

Note: I did end up getting a Barnes & Nobles copy with a Darkling prequel in it. It was lovely. Very much enjoyed it, and getting to know him better.

Agender empty-nester filling my time with cats, books, fitness, and photography. She/they.
View all posts by Amanda →
This entry was posted in 2014, Prose, Young Adult and tagged speculative, WTF moments. Bookmark the permalink.