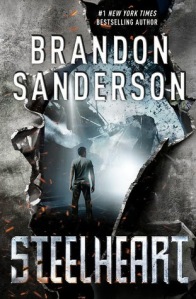 A decade ago, a red star called Calamity appeared in the sky, and certain people were granted supernatural powers. These Epics are practically invincible, and with invincibility and power, they become corrupt. Chicago is taken over by an Epic called Steelheart, and David was in the bank that Steelheart attacked on the day of the takeover. He was a small boy, and he watched Steelheart kill his father. He also saw something important: he saw Steelheart bleed. For years, he has watched Epics and gathered information, with the intent to join an underground group called the Reckoners, the only people left who still fight against the Epics. He will join them, and fight, and eventually get his revenge on the man who killed his father.

I admit, after The Rithmatist, I was a little leery about reading another of Brandon Sanderson’s YA novels, even though he’s one of my favorite authors. The Rithmatist just felt too young to be YA, and his 16-year-old main character, Joel, acted more like a 12-year-old. I was not terribly impressed, even though I liked the book. Steelheart was different. From the very beginning, it was far more grown up. David is 18 at the start of the book, and he acts more like an adult than a child. There is violence – not so much gore, but very disturbing scenes – right from the beginning. All throughout the book, there were little moments that felt more YA, but I think the book could have easily passed for an adult novel. It’s right on the brink between the two age groups.

I was sucked into this world and the story immediately, barely putting the book down. The pacing was perfect, and Sanderson once again excelled at character and the dynamics of a close-knit group. There were many things I didn’t expect, many twists I didn’t anticipate. There were moments that nearly brought me to tears. There were parts that made me angry, and then made me see things more clearly. I kept guessing all the way through. And sometimes, I was nearly right! I was convinced that Steelheart’s weakness came when someone believed he was a good person, and so he set about doing evil things – and fabricating evil things – in order to show himself to be a bad person. I wondered if perhaps we were going to get a classic Sanderson twist of discovering that the person we thought of as evil was not so bad after all. But in the end, it was a lack of fear, rather than a belief in him, that was the weakness, and I thought David was clever in how he eventually brought about Steelheart’s demise.

One thing I wasn’t sure about right away was Megan’s reappearance after her death. I get annoyed when people die and come back to life in books, and Megan’s death was particularly poignant. But discovering that 1) she was actually Firefight, 2) she had died many times and that part of her power was resurrection, with loss of memory, a day later, and 3) she was actually herself for a lot of the time, rather than an Epic – these things helped me to cope, and I hope we get to know her better in the next book. Considering it’s called Firefight, I imagine much of it will revolve around her.

I cannot wait to read the next book. This was absolutely fantastic. I only regret that it’s a bit too old to read to my boys (at least the two younger boys), and I know they were looking forward to it. Sanderson completely redeemed himself for me re: YA with this book.

1 Response to Steelheart, by Brandon Sanderson