Days of Blood and Starlight, by Laini Taylor 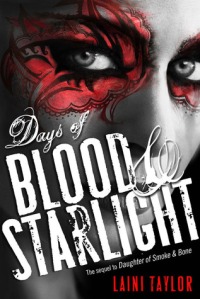 I love these books so much!! I’m so glad I finally read Daughter of Smoke and Bone this summer. I really wasn’t sure if I would like it. It was such a strange premise, and it sounded like it could be very cheesy. But so many bloggers that I respect had read it and loved it, and the book had won all sorts of awards, so I thought I would give it a chance. I’m glad I did. It was very well worth it, and the second book in the series definitely lives up to its predecessor.

These books aren’t just fun reads. They are fun, and yes, you can read them just for the adventure, paranormal, romance, etc aspects of them. But Laini Taylor excels in so many other areas. Her world-building is fantastic. Her characterization is fantastic. And there are literary themes draped all over the place, unobtrusive but definitely there, from race/class conflicts to what makes up family to issues such as rape. Beyond that, each book has a definite end, a conclusion that is satisfying even though you still want the next book as fast as possible. It’s the best way to write a series – not ending on a major cliffhanger, but letting you fall in love with the characters, so that you will want to read the next part of their story.

Already, I can’t wait to read the next book.

Revisited June 2014: I reread this in anticipation of the third book in the series, and fell in love all over again. This series doesn’t diminish with time or reread!

2 Responses to Days of Blood and Starlight, by Laini Taylor