The Well of Ascension, by Brandon Sanderson (audio) 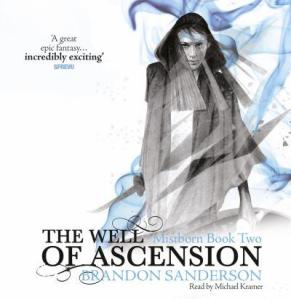 Unlike with The Final Empire, I didn’t have to gradually ease into this book. I was already familiar with the characters and world, and I was hooked immediately. I wanted to spend time with those characters I already loved. That’s the best way to set up a trilogy, I think. Don’t cliff-hang with plots, but give us characters we love and want to know more about! I sped through this book so fast on audio that I had to go back and reread it in print.

I especially loved Vin in this book. Her situation was so precarious, just as it has been since the beginning of the series. Now, she finds herself the object of religious worship, in the spotlight, exactly where she doesn’t want to be. She’s also trapped between her roles of skaa thief, noblewoman, and bodyguard. She doesn’t understand her relationship with Elend, nor does she think she’s worthy of it. In some ways, she’s so confident, and in others, completely lost. It’s endearing.

I loved TenSoon. Even though he’s forced to betray her. I never saw that one coming.

And Zane…I feel so bad for Zane. I know that spike in his chest, briefly mentioned, must have something to do with “God’s” voice. I’m guessing this has something to do with Marsh and why he’s doing things he doesn’t want to do, no longer under his own control. That quick mention of Zane’s spike just creeped me out. I want to know more! I’m curious if he’s still alive, despite Vin seeing him die, just like the inquisitors can sometimes heal. Why would someone spike Zane? Was he meant to be an Inquisitor as well?

This story also broke everything I know about the three books. Written words can be changed??? I am completely with Sazed when he loses his faith. Everything he’s ever known is a lie, or at least, can’t be trusted. What an awful weight to fall on you.

Some of the governmental stuff in the middle of the book dragged a little, and some of the battle scenes were a bit prolonged, but not too bad. For awhile, I didn’t like where Vin was headed. There were some really morally grey areas – thinking here particularly of the moment she pushes Straff into having no emotions at all, which I don’t think anyone deserves, despite their evilness. I also know that most of what she does, though, is due to Zane’s machinations, and I love that she returns to herself. And I still feel so sorry for Zane. Must have more book!

Note: This book was reread and re-reviewed in March 2016.

2 Responses to The Well of Ascension, by Brandon Sanderson (audio)