The Omnivore’s Dilemma (& In Defense of Food), by Michael Pollan (audio) 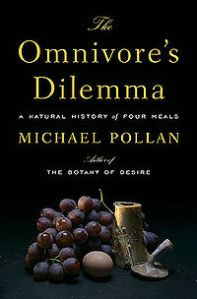 I have never before read a book about how people eat, other than the one photography book that was more about sociology than food (Around the World in 80 Diets). I avoid food books on purpose, because many are political or biased, and many advocate (ie guilt trip people into) vegetarianism or veganism. I want to stress that I don’t have a problem with other people being vegetarian or vegan, but I personally don’t believe in it. I believe humans are omnivorous animals, meant to eat both plants and animals for optimal health, and I get kind of up in arms when people try to tell me I’m wrong and present me with stories about animal cruelty. I can tell equally cruel-to-animal stories about, say, vegans who feed vegan cat food to their carnivorous cats. Plus, I’ve simply known too many vegans and vegetarians who, after many years of their diet, are now suffering from a wide range of diet-related illnesses (like adrenal fatigue). Many vegetarians/vegans I’ve met just assume I’m an omnivore because I’m either ignorant or I don’t care about animals, but this is not the case. Unfortunately, the tone of many food books assumes the same, and hence, my avoidance of them.

I’m glad I didn’t avoid this book, however. The Omnivore’s Dilemma is split into three sections, focusing first on industrial/processed foods, then on organic or sustainable foods, and then on hunting/gathering. It does not advocate any specific kind of eating, but instead goes through all the various processes by which people get or can get food, as well as the history behind current food trends. It was fantastically unbiased, simply presenting facts. Did it talk about the cruelty with which industrial and industrial-organic companies treat animals? Yes. Definitely. (A point that was interestingly illuminated for me when I visited a mid-size industrial dairy farm in Wisconsin while on vacation.) But it also talked about things I’ve never heard about in the industrial processing of plant-based foods. I admit, I was far more disturbed by what goes into processed foods than by the treatment of animals. I had no idea, for instance, just out much food out there is made primarily from corn. A McDonald’s meal doesn’t qualify as healthy in any way, of course, but even so I was surprised by the percentage of corn in some of their food, as determined by a mass spectrometer:

This is really disturbing to me, because it’s not just at McDonald’s that corn (or soy, also discussed) is the predominant ingredient in food. Reading this book has certainly made me more conscious about what I’m putting into my body!

I’ve never really been one to eat a lot of processed food. We cook most of our food from scratch, from raw ingredients and staples. I like real food, and refuse to eat unnatural and/or chemical-filled products like low/no-fat yogurt, cheese, or peanut butter. I also avoid protein bars, chemical-laden drinks, and anything claiming to be a “diet food.” The other day, we saw fat-free half-and-half at the grocery store, and Jason and I were both horrified. Years ago, I read an article talking about all the low-fat and low-carb trends (that’s another thing I hate, food trends…), and it concluded with a message that basically said: eat regular/real food, just eat less of it. Before then, I’d never really thought about food that hard, but since then, I’ve tried to live by that rule as much as possible. Now, basically reading the same ideas throughout The Omnivore’s Dilemma and later in another of Pollan’s books, In Defense of Food, I’ve been thinking more than ever about clean eating.

For the first time in my life, I’m actually interested in growing a garden (once we move away from Texas and that becomes possible). I’m interested in farmer’s markets and in sustainable farming (there was a huge portion of the organic section devoted to Joel Salatin, who is amazing). I’m interested in real produce, stuff that tastes better than what comes to me from my generic grocery store shelf, and in eating animals that are treated well and that eat the foods they are meant to eat (ie not corn). I’m more interested in seasonal eating and local production. Coupled with the trends I saw in Around the World in 80 Diets about how eating whole foods often correlated with healthy lives, not to mention my personal experiences with depression and processed food, I’ve become more conscious about eating more whole foods and a greater variety of food in general.

Now I won’t say the book is perfect. I didn’t enjoy the last section on hunting and gathering very much. It seemed to get far more personal and less professional in several ways. However, I got so much out of the first two sections that I didn’t mind so much. It’s still one of the best nonfiction books I’ve read this year, and I followed it up almost immediately with In Defense of Food. (To say a quick word on that one, it was also very good, though a little repetitive and not quite as informative as The Omnivore’s Dilemma. I did learn *some* things, though, and I love the motto of how to eat well: Eat Food, Not Too Much, Mostly Plants. I would just modify it personally to make it say “Eat Real Food, Not Too Much, Mostly Plants.” Emphasis on Real. Of course, Pollan emphasizes that himself in the book, but I like having it in the summary statement too.) I would highly recommend both books, especially The Omnivore’s Dilemma, to anyone wanting a balanced perspective on food, food processes, and food history.

Performance: I listened to both Michael Pollan books on audio, both read by Scott Brick, who did a fantastic job with both readings. I generally prefer nonfiction in audio format, and in this case, the audio lent itself well to the book.

5 Responses to The Omnivore’s Dilemma (& In Defense of Food), by Michael Pollan (audio)