The Girl Who Was On Fire, by Multiple Authors 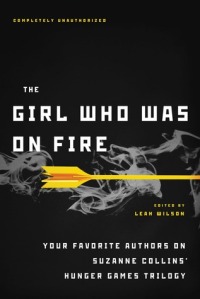 This book consists of thirteen essays about the Hunger Games series from various authors. The essays cover everything from reality TV to genetic experiments to the power of fashion.

I loved the Hunger Games series, and unlike most people, I really loved the way it ended. Mockingjay was the perfect end to a series that made me think a lot. I was worried, after Catching Fire, what might come out of the third installment. Mockingjay not only made up for a weaker second book, but improved Catching Fire, so that now I enjoy the whole series instead of just two of the three books. You might remember that back when I finished the series in September, I spent a few weeks just hashing over my thoughts. I reread the series a couple times and wrote up several posts about different aspects of the books. So when I was offered a book of essays that provided more insight and analysis into this series, I jumped at the opportunity.

I wasn’t disappointed. While there were two essays that I disliked, the other eleven were fantastic! Rather than talk about all of them, I’m just going to briefly touch on my favorite three.

The Politics of Mockingjay by Sarah Darer Littman – This essay talks about the timely publication of the Hunger Games series, focusing on the politics of the Bush administration over much of the past decade. It’s the sort of essay that will make some people very, very angry and upset, and I was actually surprised that such a strong-leaning political piece was included. Normally I see these sorts of anthologies as more neutral. Of course, I agreed with many of the things Littman says, so I wasn’t angry or offended at all. I think she’s right about a lot of what she’s saying, both in specific and in general. For instance, she talks about people turning a blind eye to everything a government does because of propaganda, or people believing face-value everything politicians say without checking the facts themselves. Right or left or whatever political affiliation, this is a dangerous thing, to just trust the people in power implicitly.

Bent, Shattered, and Mended by Blythe Woolston – This essay concentrated on PTSD and the way memory works. I studied psychology in college and so this one really appealed to me on that level. It talks about all the different ways that the brain can and does react to traumatic experiences, from detachment to flashbacks to hyperawareness. Woolston also talks about common coping mechanisms and how they are presented in the books.

Team Katniss by Jennifer Lynn Barnes – From the title, it sounds like this would be an essay related to the whole Team Peeta/Team Gale debate, but it’s not. Not really. Instead, it’s more a character study of Katniss. Barnes says that Katniss is a difficult character to understand, and I would have to agree with her that most readers didn’t understand her at all, especially considering so many negative reactions to her progression in Mockingjay. For me, though, Katniss is probably the easiest character to understand that I’ve ever read, because in many ways, she’s a lot like me. Not in situation, of course – I doubt I could survive like her – but in the way she views herself and the world around her. Katniss is focused to the point of blindness. She doesn’t express love and loyalty the way most people do. The only way she can hide her true self is behind a mask of expressionless indifference, a mask perfected after years of use. Any time that mask slips, you see directly into the true Katniss. I understood her, and I could have predicted her character development all through Mockingjay. This essay tries to help others to understand her, too, and to understand why she didn’t – couldn’t – become the traditional heroine that so many people expected in Mockingjay.

So those were my three favorites, but there were many other great essays in this book. Like I said, there were two I disliked, but the majority were wonderful. I loved revisiting the series this way, and the next time I reread it (and I know I will), I’ll have even more to think about as I turn those pages.