A Raisin in the Sun, by Lorraine Hansberry 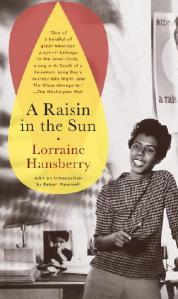 The Younger family lives in a tiny, cockroach-infested apartment with a shared bathroom in the hall. They split two rooms between the five of them: Mama, her two children Walter and Beneatha, Walter’s wife Ruth, and Walter and Ruth’s son, Travis. With the exception of Beneatha and Travis, they all work long, hard menial jobs just to get by, while the other two are going to school. All of them have based their dreams on an insurance check for $10,000 coming to Mama for the death of her husband.

This was such a fantastic play! It’s set in southside Chicago sometime between WWII and the 50s. The black community was suffering under massive amounts of injustice, many of which I recognized from reading Native Son last year. For instance, the rent and mortgage rates on houses in the black districts were much higher than white districts even though the housing was much worse, just because white owners could get away with charging ridiculously high prices when the black people had no where else they were allowed to live. They also were forced into the worst kinds of jobs, the jobs no one else wanted to do, and paid almost nothing for it. This kept them in terrible poverty, the sort that smothers dreams and kills the spirit.

That’s what’s happening to Walter, who dreams of becoming one of the rare rich black people, an important and wealthy business owner. He always has these schemes he wants to try out, but none of his family will support him on them. Of course, they’re right not to support him, because Walter is the sort of person who doesn’t see truth very clearly. He gets himself into trouble by being too naive and trusting. The women in the family see things more realistically, and this causes a rift in the family. Ruth and Mama dream of having a house, and of helping the younger generation get an education so that they can work better jobs for higher pay, but Walter wants to win the business lottery, so to speak, with schemes and get-rich-quick scams that he sadly doesn’t realize are scams. As for the two younger characters, Travis is oblivious to everything except that he wants money whenever he asks for it, and Beneatha is stuck in that late-YA/early-adulthood stage where she’s unsure of her identity and experiments with everything from atheism to ancestral heritage. Travis is too young for dreams. Beneatha wants to become a doctor, following Mama and Ruth’s plan of education to lead toward a better life, but also refuses to marry for money – an opportunity she has and which everyone encourages her to take.

This play really shows the disillusionment of all characters, and the way life never works out the way you want, even when you suddenly possess the money that should make it behave. Mama has her check coming, the wonderful $10,000 check that is all that’s left from her husband’s death insurance. That check gives them enough to get a house and to pay for Beneatha’s education, but everyone wants the money for their own purposes, and again, the family is divided, splintering off in too many directions. All these cracks tear into their fragile equilibrium, until a couple mistakes, some dishonesty, and circumstances outside everyone’s control come in to claw every member of the family down from their momentary high, until they must pick themselves up again however they can.

It was a very powerful play. There’s so much more I could talk about, but I don’t want to give away spoilers. In fact, Allie from A Literary Odyssey and I decided to read this one and post reviews on the same day after discussing the play with each other, and I think nearly everything we talked about would include spoilers. I can’t really even discuss all the stuff we talked about! In any case, I do recommend the play, and it’s both very short and easy to read. It’s really worth it.