Gregor and the Prophency of Bane, by Suzanne Collins 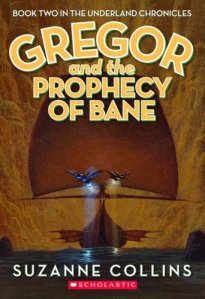 It’s been a year since I read the first book in the Underland Chronicles, but I remembered the characters all fairly well, especially Gregor and his little sister, Boots. The Underland characters, I had to catch my memory up on a bit, but Collins made that very easy.

In this book, we get introduced to some more Underland creatures. We previously met the humans (who look different from Overland humans, considering they’ve been living underground for hundreds of years, so they’ve evolved slightly differently), roaches, bats, spiders, and rats. Now we meet giant fireflies, moths, snakes, squid, and flesh-eating mites. Underland is a very interesting place.

As I said in my review last year, this all sounds a bit cheesy when you just list out the creatures and such, but the book itself is anything but cheesy. Gregor struggles with all sorts of decisions he shouldn’t have to make at his age. His family isn’t doing well, and within himself there’s a disconnect between his peaceful personality and the way that he can fight when provoked. Where the first book in the series took on a more normal story arc, with twists and traitors and surprises, the conflicts in this book have to do more with loyalty, morality, and interpretation. Things are more grey. I really enjoyed it. It was not a let-down, as many second books are, and I was eager to dive into the next book.

Writing. Family. Books. Crochet. Fitness. Fashion. Fun. Not necessarily in that order. Note: agender (she/her).
View all posts by Amanda →
This entry was posted in 2010, Children's, Prose and tagged speculative. Bookmark the permalink.

3 Responses to Gregor and the Prophency of Bane, by Suzanne Collins