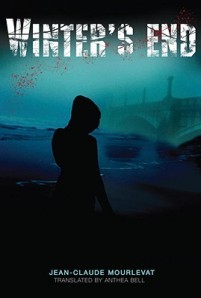 It’s difficult to summarize this book. I suppose, in short, it’s about a group of kids who escape from a tyrannical boarding school and join a resistance movement against their totalitarian government. I got the book, which translated from the French by Anthea Bell, as an ARC at ALA last year and I should note before beginning this review that the translation was excellent.

Winter’s End was…a strange book. I loved the first few chapters. The boarding school setting had that perfect dystopian feel, as if something is just slightly wrong and you don’t know what yet. Similarly, hearing that the kids got three visits per school year to visit their “consolers” to ward off winter sadness also intrigued me. When the first student runs away unexpectedly, I was completely hooked.

But then, the book sort of fell apart. It wasn’t the writing, which was good and kept me reading constantly until the very last page. But at the end, the emotional attachment fell flat and I realized I didn’t really care about what happened. I didn’t have enough investment in the characters. I took a few days to think about this, and realized it was because too much of the book was spent fighting a government and society that I knew nothing about. The setup was great, but it was only the beginning. I needed to know more and I never got that.

Then there was just so much stuff in the society that didn’t make sense. For example, a few chapters in, there’s the introduction to a new breed of creature: dog-men. They are, quite literally, part dog, part man, and they are used as intelligent trackers, like bloodhounds that walk on two legs. This took me completely by surprise. It was like I’d suddenly walked into a fantasy novel. It’s not that cross-bred creatures are necessarily out of place – I didn’t, for instance, mind the genetically engineered creatures in The Hunger Games. But unlike Collins’ world, there was no indication of advanced technology here, not among the people or in the government, so it just seemed weird.

Lots of the novel had that same half-done feel, as if Mourlevat was trying to put too much in and not developing any of it enough. When I was done reading, I didn’t feel like I really got anything out of the experience. I loved reading the book, but in the end, it just didn’t come together for me.