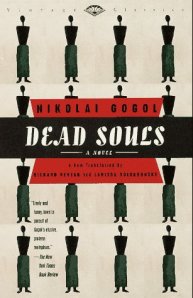 When the Classics Circuit chose to visit Imperial Russia, I knew immediately I wanted to read Dead Souls by Gogol. It’s a book I’ve wanted to read for awhile now, both for my GLBT Challenge (Gogol was gay) and because I’ve heard it’s very funny and very good. I didn’t know a thing about it (I can only attribute this to my own forgetfulness, because I know I’ve read plot summaries before!), so I’m not going to talk about the plot at all. My husband, Jason, was listening to this on audio at the same time as I read it, and he knew the whole plot in advance. It gave us very different impressions about the book, and personally I’m not sure I would have been able to get through it if I’d known in advance what sort of character the main character, Chichikov, was.

What I did know in advance was that Dead Souls was meant to be the first book in a trilogy, a retelling of sorts of Dante’s Divine Comedy. I’ve only read one book of the Divine Comedy, Inferno, which corresponds to book one of Dead Souls. As book one is the only book Gogol ever completed, that actually worked out nicely for me. There are also several chapters of Book Two included in my edition of Dead Souls (I imagine most versions include them together), but they are incomplete and feel rough and unedited. Gogol struggled for the rest of his life to finish this trilogy, but was never able to.

Beginning Dead Souls, I was immediately put off by the wordiness and profuse language, which of course might just be the translation. It was easier to read than most Russian novels I’ve tried, but not by far. It wasn’t until Chichikov began to interact with people that I started enjoying the book. The conversations were hysterical! It was like Jane Austen’s irony and humor on a much thicker scale, so that it became laugh-out-loud funny instead of just smiling-funny. Also, it was easy to see how the book related to the Inferno. There was a character for Flattery, one for Gluttony, one for Cheating, one for Limbo, one for Avarice, etc. I actually pulled out Wikipedia’s list of the rings of Dante’s Hell to cross-compare!

Chichikov had a very odd business proposal for many of these people, and it’s not one I’m going to talk about in detail. It is, however, what I found most fascinating about the book, because I didn’t know in advance what his plan was. If I’d known ahead of time, I’m not sure I could have kept reading, but it was wonderful to keep feeling out the book, trying to see what could possibly come of this bizarre business. You don’t find out until the very end of Part 1/Book 1.

I admit, I lost interest at that point. There were about 200 pages more in my copy of the text, which included the first four chapters of Book 2 and a couple random drafted chapters. They are all incomplete, missing words, with a plot that’s not entirely followable, and I admit, I did a lot of skimming in this section. I no longer cared about Chichikov by this point and I didn’t really want to read about his next set of adventures. It felt like the book was starting all over again! It was only after I got to the end that I realized that indeed Part 2 was a separate book altogether. There was a reason it felt like it was starting all over.

My end feelings were a bit mixed. I was completely let down by the work as a whole, but before those last 200 pages, I enjoyed most of my read. I loved the comparisons to The Inferno, and I thought Gogol’s satire and wit was excellent. On the other hand, I get the impression that it would be hard to fully comprehend what Gogol wanted to say with this book without knowing his plans for Books 2 and 3. The Inferno takes Dante through Hell, and just about everyone he meets is sinful and evil. The rest of the Divine Comedy is supposed to take Dante through Purgatory and then Heaven, to see the conflict between two poles and then to the good from the world. I imagine Dead Souls was meant to be the same way, and it’s sort of a pity that the only finished book was meant to represent all the scum from Russia.