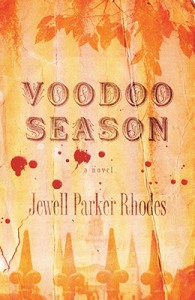 Marie Levant moves from Chicago to New Orleans during her medical residency. Once there, she begins to have strange dreams that haunt her, and her knowledge of the patients that come into the emergency room border on sixth sense. Indeed, several of the other ER doctors/nurses seem to think that she has the Sight, and is perhaps the descendant of famous voodoo priestess Marie Leveau.

Girls start to show up in the emergency room, dead but with no trace of being killed, all pregnant. Marie is haunted by them. She knows she’s connected with them in some way, especially after she discovers the pregnancy and rescues one fetus from death. What she doesn’t realize is just how deep into magic and faux-magic the investigation into these deaths will go.

I loved this book from page 1. It’s so gloriously, sensually written. I’ve never lived in New Orleans but I’ve been there twice in my life, and this book captures the feel of the city so well. This book could take place nowhere else. I loved how character-driven the book is, even while a very intriguing plot ripples outwards one wave at a time. I expected the book to take me a few days to read, but I gobbled it up in a day as it thunder-stormed outside. Perfect weather for this atmosphere!

I’m afraid the second half of the book, however, did not work as well for me. Once Marie starts to face the possibility that she is connected with Marie Leveau, and once she starts to embrace the true religion of voodoo (not at all like the Hollywood style), the book became very confusing for me. So much information was introduced so quickly, mixing present and history in long passages of italics that left me reeling. I had the feeling that if I could just slow down, I would understand better, but I was so intrigued that I couldn’t slow down. In some ways it left me every bit as worn out as The Knife of Never Letting Go did. I need my down moments. Instead, all the way to the end of the book, I felt like I was being dragged behind a fast moving vehicle, gripping tightly and trying to keep up.

As it turns out, there was a reason for my confusion – this is the second book in a series. Voodoo Dreams was published about a decade before Voodoo Season, and it was all about Marie Leveau. If I’d read that first, the recap and integration of Leveau’s life into the modern day life of Marie Levant would not have been so confusing. I would not have been lost when characters from the first book appeared without warning, that sort of thing. I’m a bit angry at myself for not realizing this was the second in a series! Because like I said, it’s a gorgeously written book and I absolutely loved it. I’m sure I would have loved it even better had I read the first book first. Voodoo Season can be a standalone, but I think it would be a million times better with the background of the first book to go on.

I really do recommend Voodoo Season, despite the fact that the second half completely unraveled for me. Yes, I think it felt too fast and too scattered, but that’s a reflection on me and my ignorance more than on the book. I think if you read the books in order, it will be a much better experience than mine. Indeed, I felt TONS better after discovering why I felt so tired and confused after such a beautiful beginning.