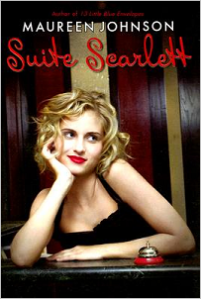 Scarlett Martin is a fifteen year old New Yorker whose family runs a quirky-though-rundown hotel. Her family is not well off despite their business, and Scarlett jumps at the opportunity of a summer job acting as an assistant to a rich patron who is spending several months in their most expensive Suite. Mrs. Amberson, however, makes life a little crazy, and between near-arrests, a failing theatre production, and a southern gentleman who might not be as gentlemanly as he seems, Scarlett’s summer turns out to be the most memorable she’s ever had.

Well first, I have to say, this was not as good as either of the Johnson books I’ve read in the past. In fact, near the beginning, I was really bored. I didn’t really like Scarlett, her parents, her three siblings, Mrs. Amberson, or Eric (the southern gentleman). They were certainly written realistically enough, but I didn’t like them as people, if that makes sense. I wasn’t sure at the beginning, though, exactly why I didn’t like them. As the book went on, I discovered my reasons – I’ll get to that in a moment.

The book did grow on me. About 200 pages in, I was hooked. Yes, it took me a long time to get hooked, but I’ve enjoyed Johnson’s work in the past so I stuck with it that long. I’m glad I did. While it wasn’t my favorite book of hers, it was endearing to a certain degree by the end. I do take some issues with it, though, particularly about the characters.

My problem: There is so much dishonesty in this book. Everyone lies. The kids lie to their parents and to each other. Mrs. Amberson lies to everyone. Eric lies to everyone even though he’s supposed to be the “truthful” character, and when he does tell the truth, it’s considered kind of bad. In the end, these lies don’t come back to haunt them. In the end, they manage to make everything work – but only if they lie. I don’t like the message this sends. I don’t like the blackmailing that went on, the dishonest stunts, or all the convoluted, disgusting behavior. None of these people seemed like decent human beings.

It also amazes me how clueless Scarlett’s parents were. They had to be the most idiotic parents on earth. And somehow, that was supposed to justify how often they were lied to…yeah. So yes, I took issue with the characters and their complete lack of the ability to tell the truth. While I was engrossed by the plot by the end, I can’t say this book promoted any good messages at all. Scarlett turns out to be quite a strong character, and yet still, she couldn’t be honest to save her life. And personally, I find that sad.

Oh well. I guess they can’t all be good. I don’t know if this was necessarily worth me reading it, honestly, but I did enjoy the second half. It’s well written. The characters feel like real people. Johnson does an excellent job with characterization. I was just a little disappointed by the message.