An American Tragedy, by Theodore Dreiser 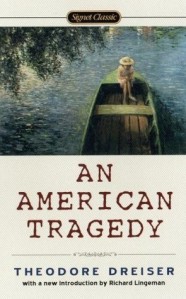 I read this book the first time in 2001, and finished it within a few days. It made a strong impression on me, which makes rereading it for my book club now a little more difficult. It was not a book I needed to reread, for myself. That said, it certainly is an enjoyable book – just more enjoyable the first time, I think. It took me much longer to get through it this time. I apologize in advance for the very long review. I can’t offer anything less for a 900-page book full of stuff to talk about.

Clyde Griffiths grows up in a poor, uber-religious household and longs to be part of the world. He is entranced by money, clothes, and women, but has no education or skills by which to improve his station. After he gets his first real job, he spends his money recklessly on material goods for himself and the women he courts, instead of saving or helping his family. An accident sends him running away from everyone he knows to take up in another city and begin again. Eventually, he connects with a rich uncle and begins to work for him in Lycurgus, NY. Loneliness pushes him to break company rules and date Roberta, a woman in his department, in secret. However, when Sondra Finchley, a high society girl, takes an interest in him and begins to invite him to functions with people far above his station, Clyde begins to neglect Roberta and tries to figure out a way to leave her. Unfortunately, Roberta discovers she’s pregnant, and when they fail to find a way to abort the baby, she insists that Clyde marry her, or she’ll expose him to his uncle and the society he’s running around with. He’ll lose his job and his place in the world just as he’s beginning to rise. Desperate, Clyde decides to emulate a drowning “accident” that he’s read about in the newspapers, and takes Roberta up to a secluded lake. The murder doesn’t go as planned, and though Roberta dies, Clyde is almost immediately captured, tried, convicted, and sentenced to death.

While there is tons to be learned from An American Tragedy, there were three things that really stood out to me in reading this book eight years ago, and those same still strike me as the most prominent themes/messages here.

The first centers around the consequences of growing up too sheltered. The book opens with a scene of Clyde’s family going out to a street corner to sing, preach, and hand out tracts. Clyde’s parents are evangelists. His father was a missionary prior to marriage, and then, as Dreiser so wonderfully puts it, his mother “had become inoculated with the virus of Evangelism” (that’s probably my favorite turn of phrase in the book) and joined the mission work. Missionary work does not pay well, however, and the family moves from city to city in search of better work. They never have enough to live on, their kids never get a proper education, and the Griffiths keep all worldly influences out of the home. Clyde knows nothing about proper social etiquette. He’s never owned anything nice, he doesn’t know how to save money, and he doesn’t know the pitfalls of worldly living. All he knows is that everything not devoted to God is a sin, and when everything is a sin, it’s hard to believe anything is really a sin. When Clyde first starts making a lot of money, his head gets completely turned. He can’t believe it’s a sin to own new clothes, or to dance, or to go out with his friends, no matter what his parents say. He rejects everything his parents taught him, because the world is so much more intriguing and fun than the life he grew up in.

I’ve known people who grew up in extremely strict and sheltered households, then in college went crazy with their new-found freedom. Some recover; some don’t. I’ve also heard people who grew up in sheltered, cult-like environments (religious compounds, that sort of thing) say that once they left, they figured they were going to hell anyway, so they might as well do it big. If everything’s a sin, equal in weight, what does it matter if you move from dancing to promiscuity? From caring about clothes to abortion? From swearing to murder? Without proper instruction on how to live in the world, rather than apart from it, Clyde finds it impossible to stick to a moral code. He scorns religion and morality, and thinks only of himself. This is not uncommon, and I believe Dreiser is making a statement on the advisability of sheltering children too much, so that they are unprepared for what they’ll meet when they leave home, and so that their heads will spin with the unexpected excess of life beyond their front door. At the end of the book, Dreiser goes back to the family singing on street corners, now in a new city, now with Mrs. Griffiths as the grandmother of a little boy. She thinks, she must be kind to him, more liberal with him, not restrain him too much, as maybe, maybe, she had— and the thought ends, but is obvious enough: “with Clyde.”

The second thing that struck me was the juxtaposition of religion and American values. Someone asked in a review I saw – What makes this book an American tragedy, rather than just a tragedy? The answer, to me, lies in what Dreiser lays out as the gods of America: money, possessions, and power. The “American Dream” itself becomes a god to worship. (Dreiser is quoted as saying “Fortune hunting became a disease.”) It is the cornerstone of our society, of capitalism. Work, scheme, climb that social ladder. If you succeed, you gain those top prizes – money, possessions, and power – and with these things, respect. Clyde rejects God and Christian religion in search of a new religion, a godless one, so to speak. And it’s not just him. Almost everyone in this book is the servant of one or another American god. Almost everyone rejects Christian teachings for the sake of worldly pleasures. Roberta, portrayed as the most moral of the characters, is willing to have sex with Clyde to keep him, and willing to have an abortion later to cover up her shame. She blackmails and threatens Clyde. Mason, the prosecutor in the case against Clyde, doesn’t really care if Clyde is convicted. All he cares about is winning the case so that he can gain a higher political position in an upcoming election. Sondra loves Clyde, but disappears once he’s accused of murder, in order to keep her place in society without scandal. Clyde willingly drops one girl he loves for another, solely due to the better station it’ll put him in. Clyde has multiple friends throughout the book that see he’s related to the rich Griffiths, and thus try to be his friend and ride his coattails to a better place in life. Everything is about money. Everything is about station. No one marries for love, but for money and position. The moral order has been dumped on its head.

Dreiser doesn’t, however, say that religion is any better, or that people are any better off if they continue to worship the Christian God as opposed to the American gods. Instead, he seems to say that there’s no such thing as a true moral order. Those characters who are the religious ones – the evangelist family, the priest who talks with Clyde on death row, the religious crowds that ask for Clyde’s head – are portrayed as lazy, weak-willed, vengeful, and/or indifferent. They are no better than those living without Christianity. In this light, morality becomes very relative.

Lastly, there’s the question of the murder itself, and whether or not Clyde is guilty. Extreme spoilers follow. Clyde plans to take Roberta on the lake, “accidentally” unbalance the boat, and leave Roberta to drown. Once on the lake, however, he finds he can’t do it. He’s a coward. The idea of murder is too much for him. He goes into a meditative, trance-like state, terrified and disgusted with himself and having no clue what to do next, since he still has no intention of marrying Roberta. She comes towards him, and he reaches out instinctively to push her away, not wanting her to touch him. He’s holding a camera, and it strikes her in the face. He immediately feels sorry, and gets up to try to help her, but his movement upsets the boat, and they go into the water. At this point, he’s done nothing wrong (legally at least, you can debate if his plotting is “wrong”). Part of him realizes at this point, though, that she is in the water and that if he just leaves her behind, she will drown, and he will be rid of her. The result is the same as if he’d pushed her into the water on purpose, like he’d originally planned.

So, he plots murder, then lets her die when there’s an accident, but he doesn’t push her into the water – is he, then, guilty of murder? Manslaughter, perhaps, sure, but murder? Is there a difference between what he actually did do, and what he’d planned to do? Is he less guilty, or is it the same as if he’d pushed her off the boat? Clyde doesn’t feel like he’s committed murder. He insists that he’s innocent all the way to the end of the book, though he confesses, eventually, that he’d planned to kill her, and that he let her die. But is letting someone die the same as killing them? Would it be different had he gone up there with a change of heart, as his lawyers contended in the trial, had an accident, and then let her drown? Where does the guilt lie? In the plotting, or the not-saving? It’s a really sticky question and the first time I read this book, I was very upset by the fact that everyone thought Clyde was guilty of murder. I didn’t agree that he was. Guilty, yes; murder, no. I still think that after my second time through. I feel sorry for the kid, and maybe that’s it. But really, it’s just that it doesn’t feel right that he’s convicted of something I don’t believe he did. I don’t believe abandoned intent makes guilt, even if the same result happens. Take an example – if two friends went up to the edge of a high building, and the first had plans to push the second over but chickened out, and then the second tripped and fell, is the first guilty of murder? He’d intended on murder, and the outcome was the same, but it was an accident that caused the fall. He can’t escape, though, the fact that the second friend would probably not have gone up there had the first not taken him. So it’s sticky, and I don’t think we’ll all agree in our evaluations. This’ll be a fun question to ask my book club in two weeks.

I think this is a very worthwhile read. There’s far more in it than I could ever cover here. Sorry again for the super-long book review.

Note: Review date is only an approximate of when this book was read/reviewed in 2009.

3 Responses to An American Tragedy, by Theodore Dreiser