The Handmaid’s Tale, by Margaret Atwood 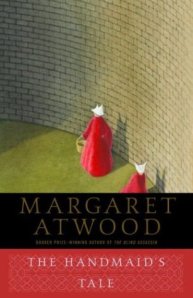 Better never means better for everyone, he says. It always means worse, for some.

This book comes so highly recommended that I feel bad saying the dreaded words: I didn’t like it. I wanted to like it. But I didn’t. I couldn’t help it. I just didn’t like it. No need for a plot outline here – what I didn’t like didn’t have to do with the plot. The plot was interesting. It was a neat setup – a dystopian society based on skewed scriptural interpretation. The dangers of organized religion as government. I just don’t think Atwood pulled it off well. Let the attacks begin.

In my defense, I will offer up the reasons that this book didn’t sit well with me.

First, there was so much in it that a lot of the meaning got lost, mixed up, jumbled around. Originally, one of the reasons I didn’t like it was because the strain of feminism so popular in the 70s and 80s (and which I can’t stand) was so prevalent in the narrative. There was so much “look at how bad women are treated” that I wanted to gag. Then I read some analysis about the book and discovered that this was actually a critique of feminism, a warning that the direction feminism was going could lead easily to this type of society. I didn’t catch that when I read this. I was more focused on the critique of theocracy, of organized religion, of televangelism, of repression of women, etc. I think Atwood had so many things she wanted to talk about, and she needed to prune her topics a little bit, because some of them were lost and counterproductive.

Second, this falls victim to the 80s writing pitfalls that I’ve discussed in the past. In general, I don’t like 80s writing, the same way I don’t like country music or soap operas. They aren’t my taste. 80s writing is really heavy to me, dry, and a total turn-off. Not to mention there’s a lot of “shock” moments that feel very juvenile – ooh, I said a bad word! Yeah. This book isn’t as bad as some, but it definitely feels tainted with the style of that decade. I don’t expect anyone else to feel the same way as I do about 80s writing – this is a purely stylistic preference.

Third, and most important, I was irritated the entire book by the writing. I’m a writer. I can’t help noticing things from a writing perspective. That’s how I see books. This one had several problems that stood out and ruined the plot – which I admit was good – for me. First, the whole past tense/present tense variation kept throwing me off. At first, I thought the pattern made sense, but after awhile, there stopped being a pattern. Memories came out as present tense; current events as past. The present tense has to be well-written in order to become convincing, seamless, invisible, and it never got to that point in The Handmaid’s Tale. But even that was a small irritation in comparison to the point of view.

Atwood chose first person POV for this book. I understand why she did – first person is oftentimes more intimate, more immediate. Authors choose first person in order to help the reader feel like they are right there with the character. You can say more about the internal conflict in a first person narration. I think it was a bad choice in this book, however. I think third person limited could have been just as effective in the intimacy and immediacy departments – more so, perhaps – and then there wouldn’t have been the trapping this book fell into. Whole paragraphs, pages, chapters, devoted to working out a plothole. The women are not allowed to read or write in this society. This diary-like book, from first person pov, could not have been written at the time the events took place. They must have been written (or recorded in some other way) at a later time. Offred’s story ends ambiguously. It was a good ending. But it was not a possible ending in first person point of view. There had to be something more. There had to be an epilogue of scholars to explain why this book exists.

The fact that there had to be an explanation for why the book exists is the biggest flaw in the book for me. It was irritating to have Offred suddenly say, “I don’t want to write this story now, I’ll write another” or “things didn’t happen that way, I just wanted to write that, now let me tell you the real story.” It detracted from the book, this focus on why/how the book was written. I could even forgive the first person pov if Atwood had let the reader suspend their disbelief and create their own ideas about how such a narrative might have been written/recorded/published. The book was far more powerful keeping it within the confines of itself, not going outwards to concentrate on the why’s and how’s. I wanted this book to be good, and I could have forgiven all else, but this unnecessary rationalization – that was the end for me. I couldn’t take it. I felt like Atwood had taken a wonderful idea and flattened it with self-justification.

Not that there weren’t some things I did like. The quote above was my favorite in the book, and it does a good job summing up their lives. Quite a powerful statement, that quote. And then I loved the fact that the Quakers ran an “underground femaleroad.” The Quakers are my favorite Christian religion – if I was Christian, that’s where I’d be going – and their tiny placement in the book was just so perfectly accurate. There were also multiple scenes that were powerfully written, and the book was, in places, very chilling.

I really did want to like this book. I’m sorry I couldn’t. I’ll just have to hang my head in shame for my dissenting voice here.

1 Response to The Handmaid’s Tale, by Margaret Atwood