The Bookseller of Kabul, by Asne Seierstad 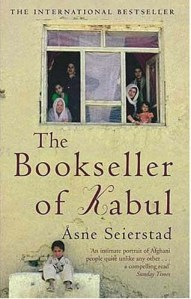 In her introduction, Seierstad states that she met Sultan Khan (the bookseller, whose name has been changed for anonymity) in Kabul, Afghanistan, after spending six months tagging along as a journalist with the military offensive in the country. She was impressed by his intelligence, by his love of literature, and by his refusal to give up his business despite decades of political oppression, and asked if he would allow her to spend several months living with his family, in order to write a book about them. The book, she tells readers up front, would not be the tale of typical Afghan life (most of the family is literate, several speak English, and they have plenty of money), but life as it was for this specific family. She also admits that she writes in what she deems a “literary” style – she acts as an omniscient narrator and puts in inner dialogue, thoughts, and feelings as she sees fit.

Now, that being said, Seierstad then goes through various happenings from her time in Kabul, as well as recounting some stories that happened before she got there (like the story of Sultan Khan’s proposal to his second wife, Sonya, a girl some forty years younger than him). Slowly, we go along little adventures, chapter at a time: tales of daily life of the refugee family members living in Pakistan (including an honor killing next door), an illegal and dangerous business trip across the Afghanistan/Pakistan border, various marriage proposals and negotiations, a trip to the bazaar, a wedding, a pilgrimage to the tomb of Ali in Mazar-i-Sharif, a trip to a women’s bathhouse (hammam), a trip to school, a woman’s quest for a job, a trip to the Ministry of Education, the plight of a thief (who stole from Sultan, who’s relentless) and his family, and a hunt for al-Qaida.

Seierstad claims to be the impartial, “invisible” companion and guest here, but from page one, it is very obvious that this is not an impartial book. The book is riddled with biases so strong it slants the entire narrative. Though she is fluent in five languages, she is not fluent in the language most of the family members speak, so she received most of her information through the three family members who spoke good English. Already, people presenting their family for other people to read about often slant their stories, and then those stories get re-slanted through the interpreter’s eyes, and then they are passed through the mouth of the author. Throughout the whole book, I felt like all I was getting was Seierstad’s personal beefs with the culture. She seemed unable to understand their customs, and determined not to try to, either. She didn’t approve of the way women were treated there, and so she spent the majority of the book telling us about how cruel women are treated and how awful men are. There is no room for other points of view. And beyond the treatment of women, just the culture in general she didn’t seem to approve of, so she spent all her time pointing out how it’s their culture that causes all their problems. The narrative is sensationalist and childishly crude at times, and she seems to have a hang up on the suppressed sex drive of Muslims, which really bothered me.

While many of the stories and images were memorable and/or touching, because of her biased reporting and contrived “literary” style, I don’t know that I can believe anything that I read. What she presents as good and bad aren’t necessarily so. They are just what she believes is good and bad. I felt the same way toward this book as I do about American tourists who think that other cultures are amusing but fundamentally wrong just because they aren’t American. I didn’t feel like I learned anything at all about Afghan culture (even about unusual middle-class Afghan culture), which is really what I’d looked forward to in picking this up. Having stayed a week surrounded by my brother-in-law’s Muslim family in Palestine, I could see moments when people or setting resembled my experiences, and I felt like I was denied something that could have been really spectacular by the horrendous job Seierstad did as a journalist. Now, I know that Afghanistan and Palestine aren’t exactly the same, but there are some similarities, and I could definitely recognize a culture similar to what I’ve seen behind the mask of what she’d presented.

Honestly, I was slightly offended by her take on the whole thing, and I don’t blame Shah Muhammad Rais (the real name of Sultan Khan, who was so distinctive in the book that a false name couldn’t hide him) for his anger at her. He is taking her to court in Norway right now, claiming she defamed him, his family, and his country. He is also asking for political refugee status after the book began to be sold on the black market in Persian, claiming his family is now unsafe, as everyone recognized him as Sultan Khan. He is too well known in Kabul for anonymity. In the meantime, he has fired back by writing his own narrative (which I’m sure is no less biased, though on the other side of the fence), called There Once was a Bookseller in Kabul. Unfortunately, it hasn’t been translated into English. I’d love to read it.

3 Responses to The Bookseller of Kabul, by Asne Seierstad