The Great Bra Hunt – Another Batch of Returns

Please see my introductory post for why I’m on a Great Bra Hunt. And feel free to skip past this post if real bra talk and related topics aren’t your thing!

Last month, after all but one of my original orders had come through with only one positive experience, I set out again to try to find something that would work for me. I get a lot of bra ads these days, heh, so I’d saved a few brands to try, and I started with that list. As it turned out, the first brand I looked at could only be purchased through third-party retailers, so I ended up at Bare Necessities. I’ve gotten several bras from their site in the past, so I decided to grab four different bras in the same place rather than individual sites (with individual shipping!). Unfortunately, all four bras were a bust, but different levels of bust, so I’ll go through them all below.

Goddess
This was the original brand I started with after seeing multiple ads, and I bought the Keira Side Support Wire-Free Bra in 42G ($46). This was also the absolute worst bra I’ve bought since the first Glamorise debacle. The fabric was cheap, scratchy, and horrible, made out of some stiff plastic-like netting, except bizarrely in the center circle of the cups, which was soft and silky. Why would you build it that way?? 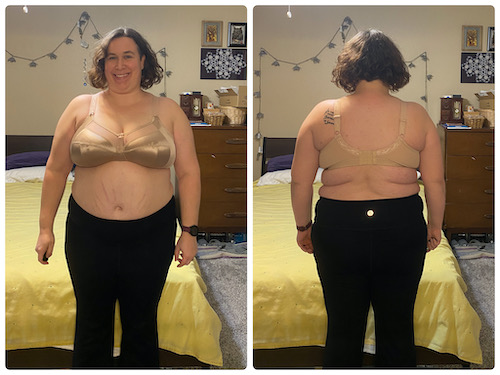 Verdict: I couldn’t even begin to tell you how supportive etc this bra was (though from the photos, I’d guess it wouldn’t hold up long!). It was so uncomfortable that my skin felt like it was being scratched and burned across the band/straps even though the size was a comfortable fit. Absolute garbage. Zero stars. Returned.

Wacoal
As mentioned in my intro post, I’ve tried Wacoal underwire bras in the past, and actually didn’t mind one – at least until the clasp broke in half! Still, I decided to give their How Perfect Full Figure Wire-Free Bra a chance (42G, $35). It looked like it might have decent lift and breast-separation. However, the description of this bra being “wire free” was a lie. While the cups weren’t wired, there was either a wire or really stiff boning fabric down the side panels right under the armpit. If I leaned over, the boning would bend outward on the bottom inch, digging uncomfortably into my ribs in a way that would definitely leave bruising. The rest of the bra was soft and comfortable, but I definitely couldn’t deal with the boning. Not to mention, it clearly didn’t do a good job with support given the lopsidedness of the photos! Also, despite two layers, it did nothing whatsoever for personal privacy.

Verdict: Not as described, not very supportive, shows lots of nipple, true-to-size and nice fabric. One star, returned.

Glamorise (part 2)
I previously returned one bra from Glamorise but decided to try them again with a more expensive wire-free bra, since their sports bras are so good. This time I tried the Magic Lift Wire-Free Bra in 42G ($48). Upon opening, I found the fabric was not quite as bad as my previous Glamorise attempt, but still not great. As soon as I put the bra on, however, I felt immediately supported.

I decided to wear the bra for a short while to see if the fabric – especially along the ribs in this case – started scratching and such. Honestly, I figured this might be a supportive wireless bra to join the repertoire of 3-star bras for occasional use (like my Torrid bra), though I doubted it could be worn on a daily basis. However – and this gets slightly complicated – I decided not to keep the bra due to something I’d recently discovered.

After the Cacique situation with the support all coming from the shoulder straps and causing headaches, I became hypersensitive to the support situation. Not long before I received this bra, I spent a day out at a hike wearing one of my good sports bras. It was a long and arduous hike, so afterwards I spent a few hours sitting around before changing, showering, etc. I started to get a severe headache that felt the same as the Lane Bryant one. This has happened in the past while wearing these sports bras for too long – the reason I don’t just use them as daily bras (yes, I tried) – but I hadn’t connected it to shoulder-support. As soon as I took off the sports bra, the headache just disappeared. (In other words, the sports bras that I so highly recommended are maybe NOT ones I’ll use longterm anymore…) After only half an hour in this Glamorise bra, I started to get the same kind of headache. I decided better safe than sorry. It’s likely the Glamorise bra also relied somewhat on shoulder support, and with the cheaper fabric, it wasn’t worth the risk.

Cosabella (part 1)
I’ve seen Cosabella ads for years, but they focus on fuller busts with smaller band sizes, and I felt it was unlikely they’d fit my plus-size frame. Their sizing only goes up to 40H, and I usually wear a 42 band in most brands. However, since I was doing a bulk order from a retailer, I decided to go ahead and try the Never Say Never Curvy Racie Bralette in XL (which should fit up to 40G/H) ($65).

First surprise: the bra fit perfectly! It’s a pullover with some stretch, and the 40-band was just fine for me. Second surprise: a wireless bra that doesn’t squish my boobs together! It didn’t seem likely at all that this bra would trend toward uniboob, and yet still covered my breasts completely. It didn’t seem to do much in the way of lift, but it was a comfortable fabric and cut, not to mention gorgeous. Still, I knew immediately that this bra would have to be returned. The racerback style puts a lot of pressure on a part of my upper back/neck that was injured 20 years ago, which causes headaches even if the bra doesn’t support from the shoulders. (I can’t wear halter-neck swimsuits or tops, either, even if the neck strap is loose, and even shirts with necklines that lay in that spot can give me headaches!) However, Cosabella has quite a few styles in a size that apparently fits me, ones that aren’t racerback, which means that I have a good brand option to try going forward.

Verdict: Lovely bra that simply won’t work for me due to the racerback style, though notably the bra doesn’t haven’t much lift support (as expected from a bralette). I’d give it 3.5-4 stars generally, but only 2 stars for myself. Returned but hopeful for other bras from Cosabella.