Please see my introductory post for why I’m on a Great Bra Hunt. And feel free to skip past this post if real bra talk and related topics aren’t your thing!

Okay! So I’m going to start at the beginning, and that beginning is Torrid 360 Back-Smoothing Lightly Lined Everyday Wire-Free Bra (which I shall now just call “Torrid Wireless” because come on) ($50). I said in my introductory post that my experience with Torrid wired bras has been exquisitely bad. Yet, Torrid is one of the best plus-size clothing lines I’ve found. Other than bras, I’ve loved everything else I’ve bought from them. So when I got fed up with my latest wired bras, and one day saw an advertisement for Torrid Wireless bras, I thought, why not? I went out to the link, and to my annoyance discovered a few things:

Still. I need something that wasn’t my painful wired bras that had lost all support. Most days I was going braless! And dudes, my large chest isn’t all that great at going braless. Back pain is real. There’s a reason I haven’t made that a permanent thing. So I ordered the boring beige 42DDD Torrid Wireless bra.

Initial Fit: To my surprise, the band was WAY too big. I had to hook it on the middle or tightest row or it just slid around. The cups seemed to be okay, though nothing special. I was pretty sure it would trend toward uniboob after some wear. Also – and I still can’t figure out why this is – the band itched around the hooks even though they face outwards. It’s not the tag or the seams, either. The fabric just itches! Everywhere else, it’s fairly soft. 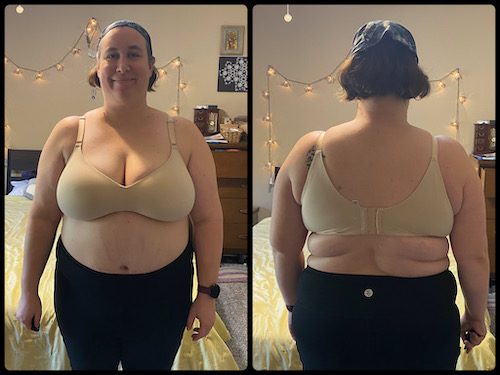 A Day’s Wear: After a few hours after wearing the bra, it trended toward uniboob, though not as bad as I expected. My left breast is slightly larger than my right, and for that reason, there was some bulging in the middle on the left cup, causing need for adjustment several times a day (visible in above photo). However, the band began to chafe uncomfortably after a few hours of wear, so I was always eager to get the thing off asap.

Longer Wear: Depending on how irritated my skin was – and how many days in a row I had to wear this bra – the band tended to scratch and enflame the skin under my breasts like with other Torrid bras. (Again, you can see the beginnings of it wrinkling up in the back portion of the above photo.) As long as I only wore this a couple times per week, I was okay, though. Lastly, the shoulder straps would loosen with every day’s wear and each time the bra was washed, so I had to adjust them before each wear.

Second Try: I ordered a second one – this time in black – and dropped a band size down due to the looseness of the 42, thinking that might help with the chafing. Unfortunately, this didn’t help. The band, while fitting properly, still got to chafing by the end of a few hour’s wear. Also, while it seemed more supportive on initial fit of my breasts – enough so that I took off the tags and wore it for a day – after several hours, both of my breasts had spilled out of the top and were smashed together. By that point, though, I couldn’t return the bra, and had to put it into my “if I lose weight” pile of clothes. Sigh.

(Yes, I chose to wear the same outfit for all these photos – trying to be consistent to give a good cross-comparison. The sweater is a good one for showing texture of any bulging, etc. In this one, I included a side photo because the bulging in this black bra is so bad.)

Verdict: Good enough to keep (the bigger bra), but not good enough as a long term solution, and I wouldn’t buy again. Three stars. Two if I had to wear them daily.