Okay. Let me get the awkward part out of the way first. If you don’t want to read about bras and bra-fit, just skip this series. There will be real talk about breasts and breast-issues, and photos in most of these posts to show actual fit (not website models). I know that’s not a topic for everyone, and it makes me extremely nervous to put this sort of thing out (especially in photos!). But honestly, this is the series I wish I could find from someone else, so I’m taking the plunge and going through with this. Again, just skip this post and future posts if this isn’t for you. Each one will be clearly labeled.

There is no way to write this post without getting personal, so here goes. I am extremely large-busted. This goes no matter how heavy or thin my body is. At a thin weight, my cup size is still in the F/G/H range depending on brand, and I’ve had more than one mammogram technician over the years comment on the heaviness and density of my breast tissue. It is heavy enough that I can’t use a chest-strap heart rate monitor unless I am standing upright – leaning over even slightly causes the skin around my chest wall to pull outwards, disrupting the monitor’s ability to detect my heartbeat. At a lower/thinner weight, I can compensate somewhat for cup size with band size. A 38D fits similar enough to a 34F/G that I can reasonably wear a normalish bra. 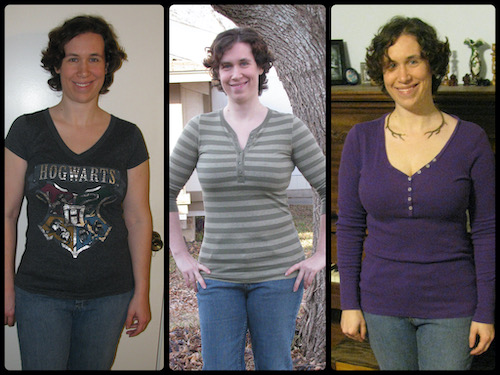 This doesn’t work so well with plus sized bras. Not only is there much more weight to support in the breast tissue, but straight-size bodies aren’t built with the same proportions as overweight bodies, which aren’t built the same dimensions as obese bodies. And that’s not taking into account all the individual body types/shapes there are! In any case, the size I need – either 40G/H or 42F/G depending on brand, with 42G being most common – can’t be compensated for with a 44/46D bra. I’ve tried. It doesn’t work, not with the way bras are currently designed. 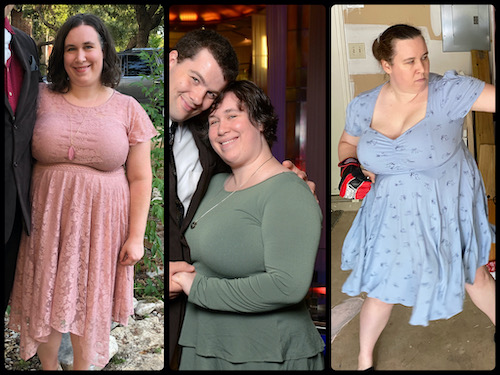 When I was thin enough, my favorite bra was the Victoria Secret Perfect Coverage bra (which I’m wearing in all three of the thinner photos above). While I still fit into their 40 band, they only go up to a DDD (F) size and only DD (E) in the 40 band. I can still wear the Perfect Coverage bra – or at least I could, until they discontinued the line awhile back – but there was uncomfortable bumpage around the cleavage area that I highly disliked since the cups were slightly too small. Plus the bras would wear out much too quick, which makes perfect sense given that they didn’t properly fit!

Okay. So I stopped dealing with the VS bras way back in late 2016, and have spent the last four years attempting to find decent bras. I’m just going to give a quick rundown of what I’ve tried and why they haven’t worked:

There may have been others over the last four years, but those are the ones that come to mind. I’ve gone back and forth between trying to find wireless bras, to dealing with wired ones that pinch and hurt and scrape up my skin, to not wearing bras at all. And I’m sick of this crap.

So back in November, I decided to go on a Great Bra Hunt. Over the last couple months, I’ve ordered around 15 different bras from various brands. They’ve ranged in cost from $25 to $90 each. When each arrives, I try them on, and if I don’t like them immediately, they get returned. To be honest, I expect most of the ones I’ve ordered to go back. Several already have. But I’m going to keep going until I find bras I love, and I’m going to share this information publicly, because I know there are other plus-sized, large-busted women out there suffering from uncomfortable bras. It shouldn’t be that way. I’m on a personal mission to change that, at least for me, and if I can help others along the way, so be it!

Life is too short for uncomfortable bras. Let the Hunt begin!

1) If you have suggestions for good plus-size, large-cup, wireless bras, pass them along! I have some other brands saved up for potential trials if none of these work out, but you can never have too many recommendations. I prefer to hear good things word of mouth than relying on internet reviews!

2) This particular Bra Hunt is focused on wire-free bras. I refuse to wear wires anymore. They are uncomfortable with my heavy-tissue breasts that cause them to rub, scrape, and enflame my skin.

3) Thankfully I found decent sports bras for larger band/cup sizes a few years ago. I highly recommend the Glamorise Custom Control Wire-Free Sports Bra, which has a front panel that allows for different levels of support based on your activity. I own several of these and would never use another kind of sports bra. 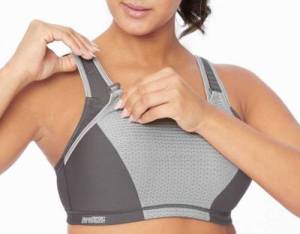 4) I have no affiliations with any bra brand, and any links I put up are for reference only. I don’t get any money or perks for linking out, and have not been in contact with any brand. If that changes – if some bra company wants me to give them a try for free or something (ha!) – I’ll note it in my post!