In mid-October, when my extended family was in a crisis in four different ways, my anxiety went through the roof and I began a combination of not-eating mixed with drinking 5-6 tumblers of iced coffee per day. This was bad for me. It clearly showed angry results with my first month of real weight gain in 2020.

To combat this, and in my first step toward cutting all coffee by the end of November (or at least down to one cup per day), I stopped buying and making iced coffee several weeks ago. If I wanted coffee after this point, I either had to make hot coffee, or go down to Dunkin’ for iced. This would keep me from binging on the stuff. Many days, I’ve gone down to Dunkin’ for an afternoon coffee. It’s not an ideal solution, but with one exception, I’ve only had two cups of coffee daily since Nov 1st.

On November 2nd, on my way home from a chiropractor visit, I strongly considered taking the exit that would take me to Dunkin’ even though it was 4pm and I usually don’t drink coffee that late. Plus, I’d already had my two allotted drinks for the day. I felt extremely anxious, and ever since transferring my anxiety-drink from wine to iced coffee over a year ago, anxiety immediately makes me crave the latter. I didn’t know WHY I felt anxious, though, and since I had a few minutes before reaching that particular exit on the highway, I sat with the emotion for a bit. Then I realized: I didn’t feel anxious. I felt hungry. The hunger was giving me anxiety.

I’ve talked recently about how I began using coffee as an appetite suppressant back in 2014, and how it completely messed up my metabolic system, causing massive weight gain. To this day, if I drink too much coffee, or drink it at the wrong time of day – ie, to stave off eating when I get hungry – I tend toward hypoglycemia attacks and weight gain. This is the reason I’m cutting it back and eventually out completely. Clearly, coffee isn’t good for my system. But it’s also not terribly good for my mental health, either. Which leads me to two things: grounding, and hunger. 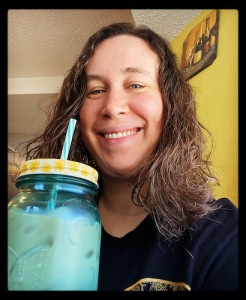 There is very little in common between wine and iced coffee, and yet, I was able to successfully transfer from one to the other to combat anxiety. It was an intuitive process and not one that I worked to do on purpose. When I look back on it, I know exactly what made the switch successful: the straw. Sounds silly, but neurologically, it’s not. Sucking through a straw activates particular parts of your nervous system, and the thicker the substance (so the harder you have to work), the more this activates. (We used to have Ambrose drink yogurt from through a straw for occupational therapy when he was two years old and had sensory processing disorder.) When you have anxiety, your nervous system is in overdrive, and by giving it stimuli, you can help to calm the system. It’s no different from putting ice on your skin or doing tapping rhythms for grounding. Drinking water through a straw didn’t help me, because there’s just about no resistance to water, but there was just enough with iced coffee thickened with half-and-half to provide a mild grounding experience. This, in addition to the stimulation of the drink itself, was the key to the wine-to-coffee anxiety switch.

Then you add in the hunger component. After using coffee as an appetite suppressant for years, and becoming more and more disordered in my relationship with food, hunger has become an anxiety trigger. It didn’t used to be. I wrote multiple posts back when I was losing weight the first time about the importance of hunger cues. An excerpt from one of these posts said:

Too often, hunger becomes the enemy of those of us trying to lose weight. We wish we simply didn’t have to deal with hunger, because if we didn’t get hungry, we wouldn’t want to eat so much, right? But hunger is NOT the enemy. Hunger – REAL hunger – is a signal from our bodies that we need fuel. Hunger keeps us alive. Hunger tells us that we aren’t starving (or in starvation mode). Hunger is an amazing, wonderful thing, and an incredibly USEFUL tool on our weight loss journeys, if only we learn how to recognize it.

But back in 2014, my anxiety, hunger cues, trauma, intuitive eating, disordered eating, and coffee consumption got all folded in together, and I stopped being able to recognize what my body was trying to tell me. And now, apparently, getting hungry outside of planned mealtimes is an immediate nosedive into anxiety. Coffee was both my go-to for unwanted hunger and for anxiety, so it’s a double whammy to overcome in order to quit the habit(s).

So. It’s time to do a little work, and transfer across my current anxiety drink from iced coffee to something else. (It doesn’t even have to be a drink, though likely that would be the easiest transfer.) I don’t know what I can use, yet. I can’t stand tea of any kind, I don’t want highly sugared drinks, and I can’t seem to find any iced milk drinks that aren’t of the coffee/tea variety (milk drinks would be best in terms of straw-tension). But this is the goal, in addition to re-learning to recognize true hunger cues again as I cut away the drink that intentionally buries them.