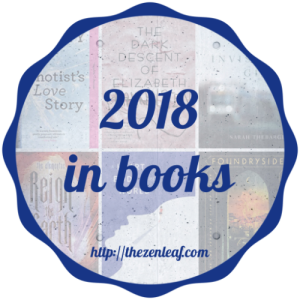 This has been a very off reading year for me. I’ve read fewer books this year than any other year since I began blogging, and I barely remember half of what I read, including books I loved while reading. Back in 2017, I talked about what a great year it had been in books and how I worried that 2018 would be a lull year. Only a half-dozen books were being released that I was anticipating, and only two of those were guaranteed reads. I’d hoped to find new good stuff to read, and I did, but I admit that the year wasn’t stellar. Reading just wasn’t my top priority, and even the books I’d highly anticipated fell somewhat flat. Oh well. Hopefully 2019 will be loads better, yeah?

I’m going to start off this post with a few stats from the year before moving on to the End of Year Books Survey from The Perpetual Page Turner.

New to me authors: 24
Most read authors: None stood out as “most” this year. Highest number was four but included two rereads, otherwise a few authors hit three books but that’s all.

Fun facts from the year: I read multiple books about historical figures or characters reimagined as women. This is also the first year in ages that I read more realistic than speculative fiction.

Best book-related discovery: The Great Courses lectures! I’ve listened to a few from Audible and have a ton more on my list to eventually get to. Lots of variety in subject matter and interests. 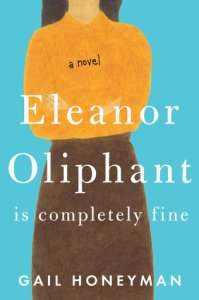 Eleanor Oliphant is Completely Fine – Usually I have a couple of favorites from a full year of reading, but this one stands above the rest by far.

2. Book you were excited about and thought you were going to love more but didn’t?
City of Brass

3. Most surprising (in a good or bad way) book you read?
Elantris. This is a reread, but the last time I read it, I felt like it was slow to begin, and this time, I was surprised by how it began with a bang and just kept running. It was a totally different experience the second time around.

6. Favorite new author you discovered in 2017?
Probably Vivian Shaw, though it’s hard to tell since I’ve only read one series from her

7. Best book from a genre you don’t typically read/was out of your comfort zone?
The Kiss Quotient (romance)

8. Most action-packed/thrilling/unputdownable book of the year?
Do Not Become Alarmed; Skyward

9. Book you read in 2018 that you are most likely to reread next year?
Excluding books I’ll probably reread to catch up before reading their sequels: The Muse of Nightmares 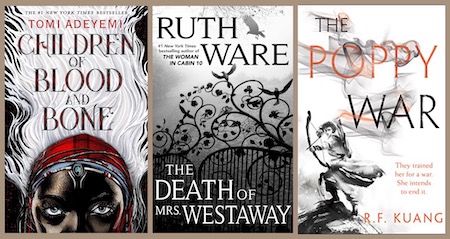 11. Most memorable character of 2018?
Clef, the sentient key in Foundryside; Eleanor Oliphant; and many of the characters from Skyward (M-Bot, Doomslug, Quirk…)

13. Most thought-provoking/life-changing book of 2018?
Not technically a book, but I listened to a Great Courses series of lectures by Robert Sapolsky called Stress and Your Body, which was incredibly thought-provoking and helped me to understand a lot about anxiety, depression, and the biological underpinnings of sociological and individual problems in general.

14. Book you can’t believe you waited until 2018 to finally read?
Eleanor Oliphant is Completely Fine – I had no interest in this book when everyone was raving about it, and I was totally wrong to dismiss it!

“Do not dash if you only have the strength to walk, and do not waste your time pushing on the walls that will not give. More importantly, don’t shove where a pat would be sufficient.” — Elantris

19. Favorite non-romantic relationship of the year?
Stephen Greaves and Samrina Khan from The Boy on the Bridge (non-family mother-son relationship); Eleanor Oliphant and Raymond Gibbons (coworkers)

20. Favorite book you read in 2018 from an author you’ve read previously?
The Death of Mrs. Westaway, which is awesome since I didn’t like the first book I read by this author

25. Book that put a smile on your face/was the most FUN to read?
The Prince and the Dressmaker, The Kiss Quotient

27. Hidden gem of the year?
Consider the Fork

So that was my year in books – how was yours?

Writing. Family. Books. Crochet. Fitness. Fashion. Fun. Not necessarily in that order. Note: agender (she/her).
View all posts by Amanda →
This entry was posted in Book Talk and tagged end of year. Bookmark the permalink.