There are/were a bunch of books coming out this year that I can’t/couldn’t wait to get my hands on, and nearly all of them were scheduled to arrive in the fall. A couple are out now, but most are still yet to come. It’s these anticipated releases that make up the majority of my fall TBR.

1. Oathbringer by Brandon Sanderson – This is my absolute highest priority book of 2017. I’ve been waiting impatiently for nearly two years since falling in love with Words of Radiance, and I’ve been gobbling up the chapters Tor releases every week as previews. This comes out in mid-November and I don’t imagine I’ll read much else for awhile after that.

2. The Scarecrow Queen by Melinda Salisbury – Goodreads told me that the end of this series would be out in March, but it doesn’t release until the end of October in the US. I can’t wait to get to this one!

3. The Empty Grave by Jonathan Stroud – This released a week ago and I’ve already finished the audiobook. I adore this series so much!

4. Into the Bright Unknown by Rae Carson – Another end of another series I’ve adored.

5. Renegades by Marissa Meyer – I do hope this ends up being a good one! 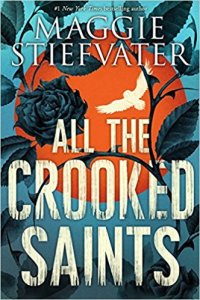 6. All the Crooked Saints by Maggie Stiefvater – This sounds so fascinating!

8. Tarnished City by Vic James – This series joined my TBR just in the spring and I can’t wait for the sequel. **Note: While GoodReads claims this will release this month, other sites apparently put the publication date in Feb next year. Boo!

9. Mrs. Fletcher by Tom Perrotta – I only recently heard about this book. I love Perrotta and put myself on the library hold list at once! Hopefully I’ll read it soon.

10. Now I Rise by Kiersten White – I only just read the first book in this series about Vlad the Impaler, and definitely can’t wait to get my hands on the next!

Most of the time, I don’t make seasonal TBR lists because I tend to read by my mood. I don’t think I’ve ever actually read more than a quarter of a seasonal TBR list! This year, though, it feels like there are so many books coming out that I want to read immediately that I’m overcrowded with excellent selections! Especially as I tend to revisit older volumes of series, or read/listen to books multiple times when they’re special favorites. And this list is just my top ten – there’s another dozen or so begging for attention right now! It’s been a long time since I’ve had so many books clamoring for my attention!

10 Responses to Top Ten Books on My Fall TBR