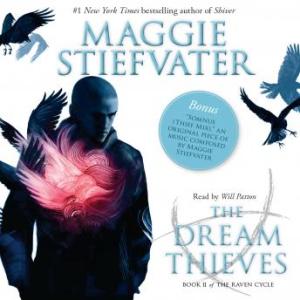 Ronan Lynch has a secret. He can remove things from his dreams, taking them into reality. But his secrets go deeper than that, and they might just get him killed.

I loved this book. I loved it even more than The Raven Boys. And because I love it so much, in combination with a stupid headcold that I’m fighting, I’m not going to be terribly coherent here. So, instead of a traditional review, I’m just going to list the top five things I loved about this book.

1. Humor. Maggie Stiefvater is hilarious. I swear, I was laughing all the way through this book. There were so many good lines, such as:

Gansey appeared beside Blue in the doorway. He shook his empty bottle at her.

Blue was a fanciful, but sensible thing. Like a platypus, or one of those sandwiches that had been cut into circles for a fancy tea party.

The victim lay on his face, as most people did after being stuck with ten swords.

That second quote, about the platypus, had me laughing for a good five minutes. It was just so unexpected and random. I felt good the entire time I was listening to this audiobook. And my kids kept asking me why I was cracking up every ten minutes.

2. Characters. I discussed this already in my review of The Raven Boys, so I won’t go into it much. Let me just say that it was fantastic to revisit known characters and watch them grow as things happen to them. Every conversation, every moment, felt natural and real, like real people instead of characters. Nothing stilted or contrived at all. It was also very interesting to meet new characters, and to have them develop not at all how I would expect. The Gray Man was fascinating. His story’s climax…whoa. That’s all I’m going to say about that.

3. Slow love. Blue doesn’t want to love Gansey, even though she knows, through magic, that he must be her true love. She wants to love Adam. We can’t control where our feelings develop, though, and it’s been wonderful to watch how Blue’s feelings are changing against her will, slowly, painfully. I love that there is nothing sudden here, no instant falling in love. I love the way Blue and Gansey’s friendship develops over a long period of time, through experience and communication. I love that it’s hard for both of them. That scene, cheek to cheek, walking away…ohhhh. Agonizing and lovely all at once. Also to note: I love that this isn’t a love triangle setup, when it could easily be one.

4. Hard truths. When people are chronically abused and hurt, they don’t just magically turn out to be well-adjusted adults. Abuse messes people up. At the beginning of the series, we see Ronan, all anger and violence and fury, and we see Adam, all fatigue and worry and work. And yeah, Ronan has reasons to be angry. His father was murdered, and he’s not allowed to go home. But he was loved, and cared for, and that comes out even through his messed-up-ness. Adam, on the other hand, was physically abused, and no matter how hard he fights against the stigmas of abuse, the signs of it come out of him. Sudden violences, smothered or not. This is only one example. There are many. Hard truths. Stiefvater doesn’t run from them or water them down.

5. Family. For this point, I will simply leave you with my favorite quote of the book, which pretty much sums up how I feel about family, too:

For Blue, there was family – which had never been about blood relation at 300 Fox Way – and then there was everyone else. When the boys came to her house , they stopped being everyone else.

Performance: As an added bonus to my Top Five Things To Love About This Book, I need to mention the audiobook performance itself. This also made the book phenomenal for me. I wasn’t sure, when I began the audiobook of the first book, that I would like it. I’m not generally a fan of audiobooks performed in heavy southern accents. This one is an exception. It’s brilliant. I love the way Will Patton reads this. Now that I’ve finished these two books – and the third isn’t quite out yet, agh – I want to go back and reread them. To tell you just how much I love these audiobooks, I’ve rejected the idea of going back to reread in print, and will instead relisten to them. Actually, I’ve already begun another audiobook, but I’m interrupting it to go back to relisten. Yeah.

4 Responses to The Dream Thieves, by Maggie Stiefvater (audio)